Being pure and noble by overcoming desires

Ms. Setouchi is now 96 years old. She became a nun at the age of 51 and is now living at Jakuan (her temple) in Kyoto. Her monthly sermon is very popular. Many people come to talk to her about their problems. She is also an active writer, currently writing series for literally magazines in addition to Buddhist work. There is only one writer in Japan that is an active writer at the age of 96. She continues to write almost every day. 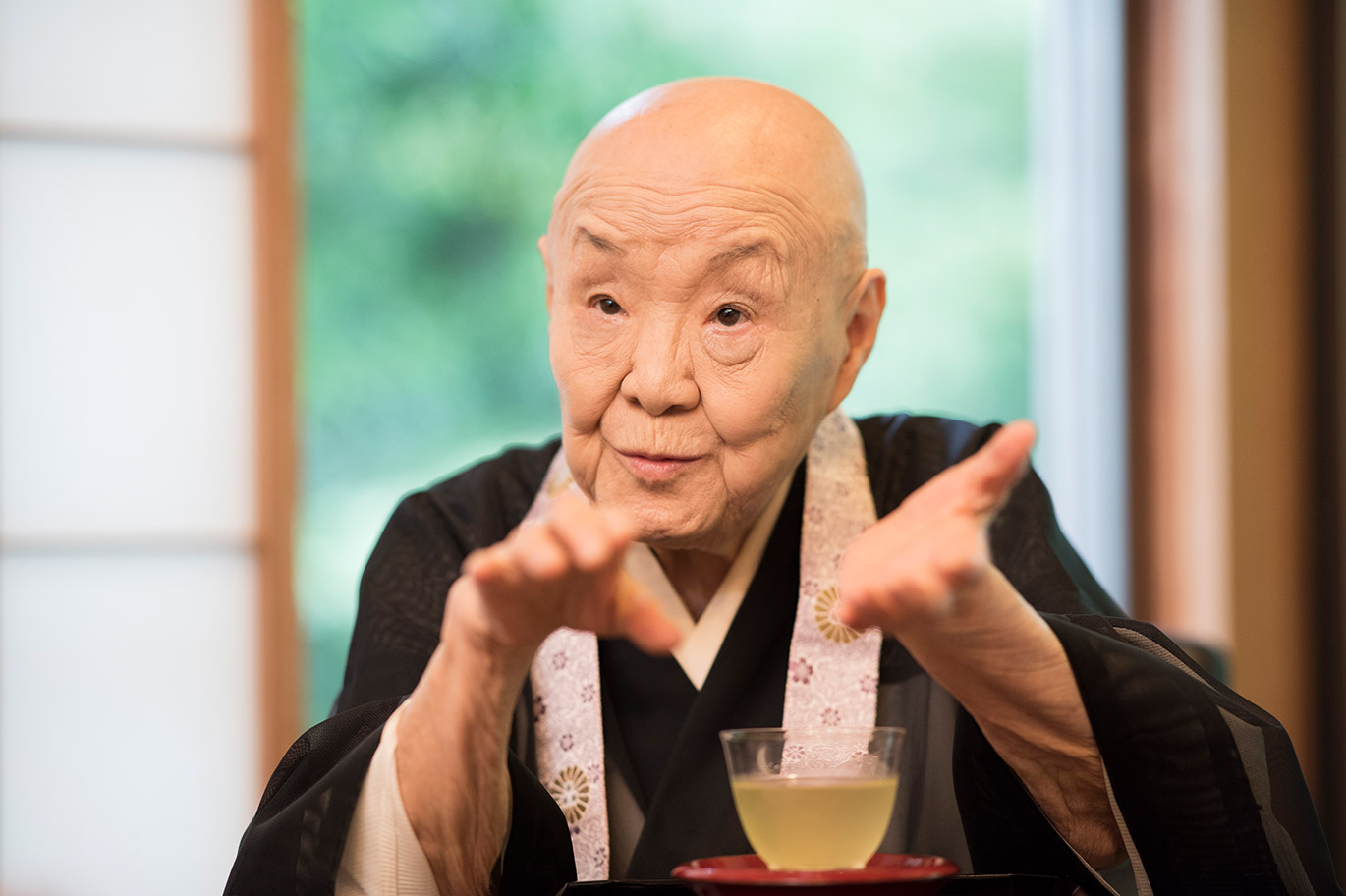 Everything leads to aesthetic sense

Despite her age of 96, she appears dignified and beautiful. Just by being close to her makes you feel fresh. Looking at her face which always carries a smile, you may even think that you may be facing Amida (Buddha) himself. As you grow old, you cannot avoid physical deterioration such as wrinkles or deterioration in the texture of your skin. However, on the other hand, there is also beauty that pours out from the soul which can only be a reflection of how that person has lived her life. Ms. Setouchi says that aesthetic sense is at the base of every conduct she makes. She says this is including what she eats, what she wears, how she acts, how she thinks and who she meets.
“You should not be together with someone that does not share your aesthetic sense. One’s aesthetic sense does not change after growing up. You should get rid of that person immediately.” laughs Ms. Setouchi. To come to think of it, may be in our daily lives, we often encounter and force ourselves to accept incidents that do not agree with our aesthetic sense. It is important that we continue to be conscious of its existence to grow our aesthetic sense.

The effect of laughing

We asked why people never stop to come to hear her sermon. She said it was because “there is a laugh”. She says “My talk is funnier than Rakugo (a traditional Japanese comic storytelling)”. She says that laughing is a salvation for people. “Imagine, you cannot be angry when you are laughing. Even when you have a problem, laughing once will reduce a bit of your suffering. By the time you laugh ten times, your problem will be gone!” She says that laughing can be the salvation for everything. People that come to the sermon all have some sort of problems or sufferings. She says that she does not forget to make them laugh whilst sincerely answering each and every question they have.

Being pure and noble by overcoming desires

Becoming a nun means overcoming desires. However, according to Ms. Setouchi, that does not mean you got rid of all your desires. “How can a person without a desire be interesting?” The three desires in life, food, sex and sleep. Human beings are full of desires. Ms. Setouchi, however, says she can control her desires because she has become a nun. Ever since she became a nun at the age of 51, she says she has refused anything to do with sex. “No kissing. But you can have someone you like. It’s platonic. Everyone says that is not possible but it is if you become a nun.”
“Love romance is about wanting more than you give. It evolves ugly jealousy, anger or even hatred. Love without sex is pure and beautiful.” May be this is Buddhism as well as something that comes from Ms. Setouchi’s aesthetic sense. She says she is happy that she became a nun, saying that “That is not possible unless you are a nun.” Amongst a number of people she had met, she recalls meeting a monk of Eiheiji who told her that he had never slept with a woman. Ms. Setouchi asked “How could you possibly do that?” to which he replied “Because Buddha said I shouldn’t.” She said he was a “pure and noble” person. Getting to know such person was one of the many good things about becoming a nun, she says.
“We live in a world full of desires. You will not be able to detach yourself from desires unless you become a nun,” she says with conviction. However, may be it is when you realize that you cannot detach yourself from desires that you finally manage to deal with them.

Asked about donations she says, “I don’t believe there is anyone that really wants to make a donation, given there isn’t anyone that has too much money to spend. However, as we know it is a good thing, we also think it is something we should be doing.” “You also feel you want to support that person even more if she/he is nice.” “It surely will make you happy if you find out that your donation was put to good use.” All sink in as her candid words.
She told us that the work of Buddhism itself is not profitable. She says her donation comes from the money she made by putting her entire heart and soul into writing novels and giving lectures. She firmly denies any speculation that she is making donations because she has lots of money. It is not only money that she donates. For example, she spearheaded a hunger strike in a sit-in protest against nuclear power. If she hears there was a natural disaster, she would visit such locations immediately and give a shoulder rub to the victims in addition to making donations. A long queue is formed by people waiting for Ms. Setouchi to give them a shoulder massage and listen to their stories. What a moment of relief that must be for the people suffering from the disaster. It is moving to imagine how she rushes to disaster sites with whatever money she could gather at hand. Such actions must touch the heart of many others, encouraging them to join her in providing support.
You must do it because it is a good thing. Let’s support him/her because he/she is nice. Let’s help if there is someone in need. These simple and straightforward actions may also be based upon Ms. Setouchi’s aesthetic sense. 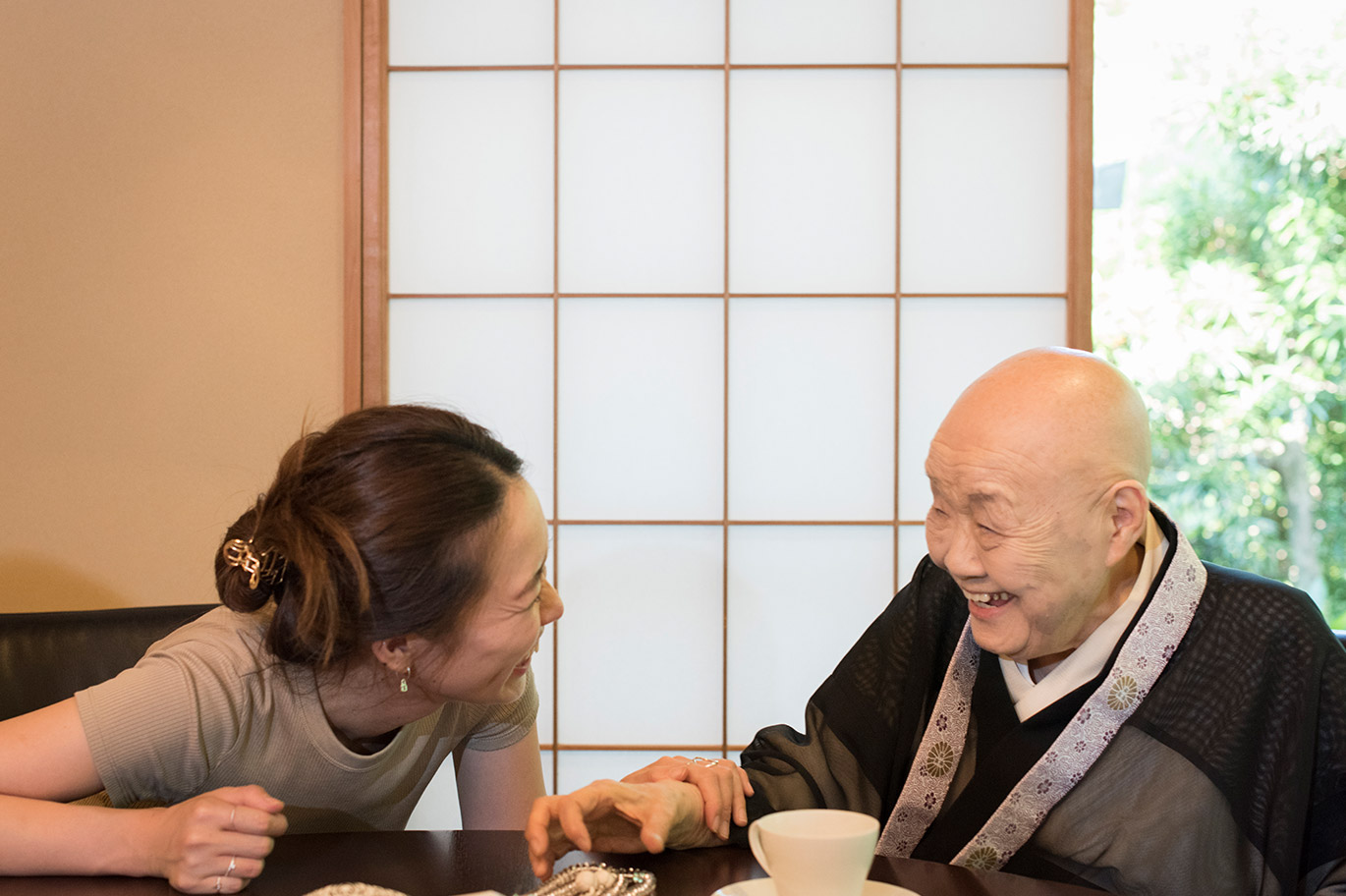 Manaho Seo, a 30 year old secretary of Ms. Setouchi was also present at the interview. Her recently published book, “Ochame Ni 100 sai! Jakucho San” was very popular. The book describes with humor how the two, with an age difference of 66 years, live together. Apparently, it was just by chance that Ms. Seo came to work for Ms. Setouchi at the recommendation of her friend. Although she didn’t know anything about Ms. Setouchi then, she is now working hard, wishing from the bottom of her heart to make Ms. Setouchi happy all the time. I was even touched seeing her devotion. Moreover, the way they supported each other regardless of their age difference seemed very natural and beautiful. Now Ms. Seo says that nothing makes her happier than making Ms. Setouchi happy and joyful. I could see that their relationship was something beyond that of secretarial work and was based on respect and deep love. One could also see how Ms. Setouchi can be “Ochame” (playful, mischievous) usually.

Although it started by chance, Ms. Seo now believes she had found her vocation. She says she sometimes wonder how she managed to get here. Ms. Setouchi says “you came here because you had ‘en’ (fate, special connection)”. May be how people are connected to each other is something beyond human knowledge. May be it is “en”, that special fatal connection beyond human knowledge that determines our relationships.
Ms. Seo writes often to Ms. Setouchi but says she received her response in the form of a novel. Ms. Setouchi’s novel “To Mona” was written with “Manaho” being the model. Ms. Seo says she could not stop crying when she first read the novel which was handed to her by Ms. Setouchi. The relationship between them seems to be growing deeper every day. Above all, Ms. Setouchi seems to be growing even younger as she absorbs the energy from Ms. Seo. Although unintentionally, living together with someone as young as a great-grand child may be another reason for her long life.

Ms. Setouchi was very honest and straightforward in answering all our questions. While saying “No one wants to donate,” she also says “but given it’s a good thing, we ought to support, don’t we?” Her candid words give comfort to others. Ms. Setouchi says she is truly happy that she became a nun at the age of 51. Although one can only imagine how it feels to be at her stage, we caught a glimpse of her perfectly clear soul at the interview which can only be reached after overcoming desires, vanity and obsession for status. Ms. Setouchi is still full of energy. Please continue to make a lot of people laugh.